I've tried to avoid trite statements of righteous indignation over responses to hurricane Katrina, but some reactions provide ideal-typical examples that can be useful in teaching. I took a break from putting together a powerpoint slide on "deviance and morality" for my second lecture on "defining deviance," only to see this item (from the American Family Association's Agape Press by way of Volokh):

Rev. Bill Shanks, pastor of New Covenant Fellowship of New Orleans, also sees God's mercy in the aftermath of Katrina... Shanks says the hurricane has wiped out much of the rampant sin common to the city. The pastor explains that for years he has warned people that unless Christians in New Orleans took a strong stand against such things as local abortion clinics, the yearly Mardi Gras celebrations, and the annual event known as "Southern Decadence" -- an annual six-day "gay pride" event scheduled to be hosted by the city this week -- God's judgment would be felt. “New Orleans now is abortion free. New Orleans now is Mardi Gras free. New Orleans now is free of Southern Decadence and the sodomites, the witchcraft workers, false religion -- it's free of all of those things now," Shanks says. "God simply, I believe, in His mercy purged all of that stuff out of there -- and now we're going to start over again."

Am I correct to assume that Rev. Shanks' statements would be considered deviant and negatively sanctioned in most churches? They seem to be cited approvingly in Agape Press. I'm aware there is an old (testament) tradition supporting some variant of them, but I'm surprised to see a local pastor make such points. I thought the "Who Would Jesus Kill" bumperstickers were cheap religion bashing, but Rev. Shanks seems to have some clear answers to this question. I'll use the quote in class tomorrow, but only alongside a humanitarian statement from a religious leader to balance the presentation. Here's one from Catholic Relief Services: 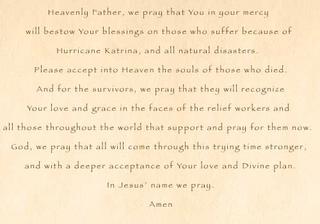 Posted by christopher uggen at 8:30 PM