when little things mean a lot 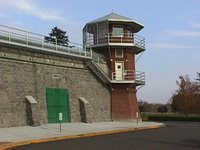 if you haven't experienced it, it's hard to imagine what life in prison is really like. i don't claim to be an expert on this topic by any stretch of the imagination, but in spending time with young inmates in a juvenile prison while doing research for my dissertation, i came to understand how little things can mean a lot to incarcerated populations.

the washington state penitentiary in walla walla is now in its fourth week of lockdown. more than 1000 inmates in the main facility are being confined in their cells up to 23 hours a day, fed meals in their cells, and only allowed to shower every third day. the lockdown began on march 1st after three corrections officers suffered minor injuries in altercations with an inmate. the extended lockdown was imposed because prison administrators received reports that more attacks on corrections officers were planned.

the cause of this unrest? a change in dining policies. according to a penitentiary spokesperson:

Inmates are upset because they fear new dining-hall procedures may restrict the amount of food they get as well as their ability to sit where they please, Scamahorn said. Inmate workers who dish out food and those who receive it no longer can see each other, so diners can't get larger portions through intimidation or friendship, she said.

A new wall with small slits for food trays now separates food workers from diners, and a new rail keeps those waiting for food from mingling with those who have been served.

After they get their food, inmates are required to take a seat in a certain row of tables. In the past, they could go to any table in the dining hall.

A stricter tier-by-tier release to the dining hall also prevents inmates in one tier of cells from mixing with those in another, Scamahorn said.

it may seem like a small thing to those on the outside, but dining privileges mean a lot in prison. they mean so much, in fact, that the institution known as concrete mama is currently in its longest lockdown in more than 25 years.

on a much lighter note, the oregon department of corrections now offers inmates video games as incentives for good behavior. as the oregonian reports, prisoners may earn the right to purchase a $35 plug-and-play video game system preloaded with 50 games after 18 months of good behavior. such incentives have taken on new importance now that 40 percent of oregon's inmates are serving mandatory sentences and cannot earn time off their sentences with good behavior.

like many other states, oregon has crowded prisons with few options for education or recreation. the dreamgear 50-in-1 video game is in great demand. such incentives seem to be showing promise. the oregonian reports that in the past three years, "misconduct reports, assaults on staff and inmate fights have declined slightly, even as the state's prison population continued to grow from nearly 12,000 to more than 13,000. What's more, when prisons began offering incentives in 2003, only about 20 percent of inmates had 18 months of clean conduct. Now, about 35 percent are at that level."

little things mean a lot to those doing time in prison. whatever your thoughts about the purposes of punishment, it seems clear that offering even minor privileges and small incentives to inmates makes prisons safer places for those working and living with the walls.
Posted by christopher uggen at 7:04 PM