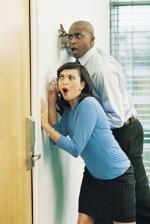 both felon disenfranchisement and the nsa's domestic surveillance program appear to pit treasured civil rights and liberties against vilified groups that may threaten public safety.

james love has a nice little piece on telephone records of "who calls whom" at huff po today. i have no expert knowledge on any of this, but i'm concerned as a citizen about the selective application of these data against those on any president's enemies list. here's how mr. love puts it:

yikes. i'm already paranoid that the little "click" on my phone is really gene hackman listening from a van outside the social science tower. yes, i can certainly imagine such scenarios all too vividly. so, apparently, can my fellow citizens. a new usa today/gallup poll suggests that civil liberties comes out ahead (51% to 43%) on surveillance, just as it does on disenfranchisement. here's the question:

As you may know, as part of its efforts to investigate terrorism, a federal government agency obtained records from three of the largest U.S. telephone companies in order to create a database of billions of telephone numbers dialed by Americans. ... Based on what you have heard or read about this program to collect phone records, would you say you approve or disapprove of this government program?

this represents a statistically significant difference for a sample of 809 respondents (unfortunately i couldn't gather response rate or any other methodological details from the story). such views are likely to change rapidly, of course, but at least the phone database question seemed to be worded in a fair manner. in particular, righties would like the lead-in ("as part of its efforts to investigate terrorism") and lefties would like the detail on the program's scope ("billions of telephone numbers" and "dialed by Americans"). in my opinion, neither side should be completely happy with the wording on any contentious partisan issue. here are some related items:

how would you have responded? i'd find myself in the disapproving 51% but probably not in the hardcore libertarian 31% that say "not under any circumstances." off the top of my head, i'd say that the circumstances would involve demonstration of a compelling and specific need, an independent judicial review, and a long list of data assurances. i can imagine the official response to requests for such safeguards:

"well, gosh, if we had all that, we wouldn't need a domestic telephone surveillance database."