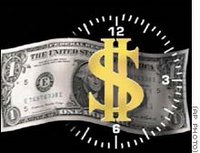 how much do you think one day of your life is worth? no, really. if you had to give up one day, what would be your price? i'll admit to occasionally having days that i would pay to have someone take for me, but in general, it's hard to put a price on one's life. some have tried to quantify it, but that doesn't speak to issues of quality and what you may miss in a day that you gave up or lost.

now, what if you were wrongly convicted of a crime and spent years of your life behind bars? not only would you have missed all kinds of potentially lovely experiences, you would have been instead subjected to truly miserable ones. how much would a year of your life be worth to you then?

michael evans thinks his is. the chicago sun-times reports that evans, who wrongfully spent 27 years in an illinois prison before being freed by dna evidence, is seeking up to $58 million dollars in damages. he is asking for $2 million per year he was in prison plus $1 million punitive damages from each of the four police officers who conspired against him. if the nine person jury finds for evans, the four officers will be personally responsible for the punitive damages and the city will pay the $54 million in compensation. the jury is currently in deliberations.

so how much is a day or year in your life really worth to you? do you have opportunities that may never come again? if so, are you taking full advantage of them? there may never be a better time.
Posted by christopher uggen at 6:27 PM