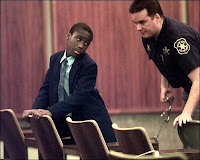 as the detroit news reports, nathaniel abraham turns 21 on friday and will be released from state custody. we just talked about abraham's case in my delinquency class last week. i often start the course with the basic facts of his case -- in 1997 at age 11, nathaniel shot and killed 18-year-old ronnie green. in spite of his youth, he had a history of contacts with the police and had basically fallen through the cracks of the juvenile justice system. his mother had sought help in controlling his behavior but was put on a waiting list. the wait proved to be too long and ronnie green and his family paid the ultimate price.

the interesting question in this case was what to do with an 11-year-old murderer. should he be held as responsible as an adult offender? under michigan law, nathaniel abraham was tried as an adult. when a jury found abraham guilty in 2000, the judge had a big decision to make -- he could sentence nathaniel as an adult where he could face life in prison without the possibility of parole; he could sentence him as a juvenile in which case he would be out on his 21st birthday; or, he could give a blended sentence in which they would re-evaluate nathaniel at 21 and potentially move him into an adult prison.

judge eugene arthur moore sentenced nathaniel as a juvenile (for some of his reasoning see here) and has had regular contact with him over the last 7 years. now, after being raised in juvenile correctional facilities (and, yes, costing the people of michigan nearly a million dollars in their attempts to rehabilitate him), nathaniel will be a free man on friday.

as the article reports, he will walk into the world with no job and no ongoing education. and the world will be watching. nathaniel abraham is perhaps the test case for what the juvenile justice system can do to rehabilitate young offenders in this day and age. will he be able to build a successful life in the community? what will it take? what do you think?
Posted by michelle inderbitzin at 10:59 PM

I just seen the case in american justice....and i dont know who i empathize more with the victim or the accused....i think we need to do SOMETHING about our children, and how we can help them be more productive people, it take a village, his mom probrably did her best but unfortunatly thats not enough....we need help.....shit my son has anger issues at age 2, and ....so what do we do, do we start this early assuming something wrong?,