abusive priests and the institutional response to deviant behavior 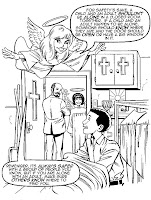 heather hlavka sends word of Being Friends, Being Safe, Being Catholic, a new comic book by the new york archdiocese of the roman catholic church.

1. the comic book seems like a bizarre but straightforward and well-intentioned effort to address real problems, including the sexual abuse of children by church officials.

2. sadly, this effort is unlikely to prevent any abuse. while a comic makes for a good sunday school conversation starter, it is absolutely no bulwark against a calculated power-play by an adult in a position of authority. worse, such efforts seem to imply that children are responsible for their own vulnerability -- and that it is their responsibility to become more vigilant in protecting themselves. i hope that the archdiocese is informing priests of this "no-closed-door" policy and taking reasonable steps to enforce it.
Posted by christopher uggen at 4:32 PM