this time of year often brings media requests regarding trends in crime and punishment. answering such calls is important public criminology, but responding can be tricky. reporters often focus on year-to-year changes in rare events such as homicide, but the percent change in such cases can be very misleading. i see my role as providing some context for the local numbers, putting them in historical, national, and international perspective. reporters typically speak with both law enforcement officials and academics, so i try to offer some perspective. i usually focus on 5-, 10-, and 20-year trends and consider the magnitude as well as the direction of change.

by most measures, crime in minneapolis and st. paul rose from 2004 to 2005. this is cause for concern, in part because serious personal crimes such as aggravated assaults and robberies have increased sharply. that said, the base rate of crime in the twin cities is quite low relative to similar-sized cities and relative to local crime rates in the near and distant past. moreover, some of the bad news is a product of legal changes rather than behavioral changes. for example, a new state "strangulation" statute means that many domestic assault cases once considered misdemeanors are now counted among the aggravated assaults in the violent crime index (i learned this speaking with pete crum of the st. paul police department last week). despite the uptick, my take-home message for reporters who want my opinion this year is that national crime rates are at the lowest levels we've seen in forty years and that these are good times rather than bad ones. 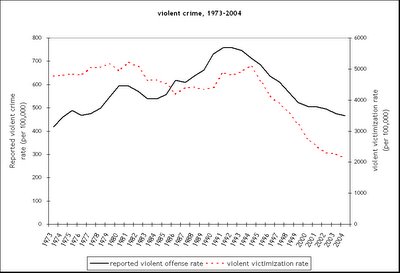 here is my evidence for this assertion. rates of serious violent crime -- murder, rape, robbery, aggravated assault -- continue a long decline, at least through midyear 2005. the chart above shows the national picture for violence as measured by both victimization (red dashed lines - - -) and crimes reported to police (solid lines). i plotted these on separate y-axes so you can see the relative change in each measure. note that violent victimization has been dropping like a stone since the mid-nineties, as have police reports of these four serious offenses. 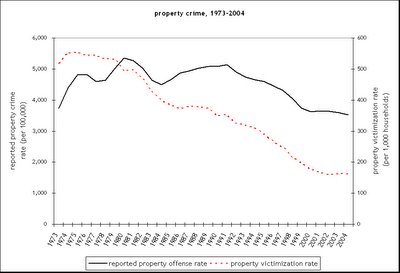 the next figure shows that property crimes of burglary, larceny/theft, and motor vehicle theft also show a decline, although here the rates have flattened since 2002. nevertheless, for both violent and property crimes, victimization levels are at or near record lows, at rates roughly half those of a decade earlier.

of course, none of this makes crime victims or their families feel any better about it, nor does it mean that we no longer need to lock our doors or that we can scale back investments in law enforcement (punishment is another matter). it just means that rates of serious crime are lower today than they were 5 years ago, 10 years ago, 20 years ago, and 30 years ago. good news, right?

Posted by christopher uggen at 7:56 PM No comments:

i just screened democracy's ghosts: how 5 million americans have lost the right to vote, an aclu documentary made by off-ramp films.

the 34-minute film features some persuasive interviews with former felons and activists, as well as lani guinier and alex keyssar of harvard, marc mauer of the sentencing project, congressman/civil rights icon john lewis, evangelist/watergate icon chuck colson, and actor charles dutton. the dvd also includes a 10-minute short version, 5 "expert perspective" segments (where i pop up briefly -- i did a quick interview in dc on my way to maryland this spring), 5 issue-specific pieces, a graphic video, and a short trailer, which you can see in quicktime or windows media player. the film is designed as an "advocacy tool," so it doesn't give much time to the perspectives of disenfranchisement defenders such as roger clegg. florida governor jeb bush is shown in clemency hearings, but i doubt he'll be using this particular footage for campaign ads.

that said, i think it could be useful in provoking classroom discussion in criminology or political sociology or racial and ethnic studies courses. i'm too close to really judge whether students would find it interesting, but the film seems lively and well-informed to me. it was nice to see some research on the issue put to use, albeit without the caveats that we always try to include in the articles. the dvd touches on the racial history and impact of disenfranchisement, the numbers affected, recidivism and reentry, and other issues that jeff, and melissa, and angie and i have studied. my quick google search couldn't find a site for the film yet, but www.democracysghosts.org should be online anytime now. i got my copy of the dvd through rachel devaney at commtemp@aclu.org.
Posted by christopher uggen at 7:57 PM No comments:

volokh reports a strange tale involving the yale law journal's decision to publish an author who used racist speech in his online notes. kiwi camara posted notes from his property class in a harvard law outline bank, complete with a "disclaimer" noting that they "may contain racially offensive shorthand."

yep! that counts as "racially offensive shorthand" in my book. when the notes came to light, yale law students circulated a petition that began as follows:

THE PETITION
We, the undersigned students of Yale Law School, request that the leadership of the Yale Law Journal reconsider its decision to publish the work of Kiwi Camara and to have him speak at its Symposium this Spring...

yale law journal nevertheless decided to publish, writing a lengthy response in defense of its decision. as social scientists who've written for such outlets know, law reviews operate way, way, way differently than american sociological review or criminology. law faculty submit the same article to dozens of journals simultaneously. then, student-run editorial boards read them all and make offers to those deemed worthy. after the faculty ruthlessly exploit the free labor of the law students, however, the students exact vengeance by obsessively critiquing every footnote. here's the sort of email exchange that plays out over a few weeks:

but i digress. there are all sorts of distracting digressions to this case. for example, the precocious mr. camara was age 17 when he wrote the notes, which led some lawprofs to the "adolescent racist boys will be adolescent racist boys" defense. the very clever but slightly-less-precocious students, in contrast, think that the doogie howsers of the world should be held to the same standards as any other students. finally, mr. camara has issued something sort of like an apology. still, this doesn't address the larger issue of whether to publish work by known or suspected racists (or sexists, or homophobes...).

i'm guessing that most sociology journals "pre-ject" papers by known or suspected racists, sending them out for external review but reading them and their reviews with a jaundiced eye. if such sentiments came to light following formal acceptance, however, they would likely abide by their publication decision unless (and this is an important 'unless') such sentiments had some plausible bearing on the article's findings or conclusions. what about your favorite sociology and criminology journals? would they, could they, withdraw their acceptance on the basis of offensive speech that came to light? is racist speech different than other forms of offensive speech in this regard?

now that i think about it, i remember writing racist speech in my first year sociology notes --quotes taken verbatim from durkheim and weber.
Posted by christopher uggen at 7:58 PM No comments:

tomorrow night i'll be participating in bringing human rights back home, a minnesota human rights center conference. i'm excited about the free evening performance of i voted for gummi bears, ochen k.'s one-person multi-media show on the history and impact of felon disenfranchisement. i've seen a preview of ochen's show and it is truly amazing -- surprisingly funny and personal, but also well-informed by the social science literature. his performance is at 7 pm friday in mondale hall of the university of minnesota law school, 229 19th ave s., minneapolis. i'll be on a panel of discussants immediately following the performance from 8-9 pm.
Posted by christopher uggen at 7:58 PM No comments:

a dvd entitled "stop snitching" features armed men threatening those who would roll over on others as police informants (e.g., "we got a lot of rats up here we wanna expose ... it ain’t too many of ‘em, cause we deal with them”). stop snitching dvds and t-shirts quickly fanned outward from baltimore to pittsburgh, boston and elsewhere, fueled in part by the appearance of basketball player carmelo anthony in the video and entrepreneurs publicizing the phenomenon with sites such as stopsnitching.com.

i haven't seen any t-shirts in the midwest, but the dvd has been a very hot topic on the east coast for the past year. in fact, the baltimore police even put together a short video response to stop snitching, titled keep talking.

volokh reports on the constitutionality of seizing stop snitching t-shirts and the ejection from courtrooms of those wearing them. the story also raises sociological questions about the use of informants, police-community relations, and violence as "self-help." the phenomenon seems to be driven in part by law enforcement practices that rely increasingly on the use of informants. as the police have upped the pressure on informants, the "inform-ees" have applied countervailing pressure: violence and the threat of violence.

so, what's the solution? large-scale use of snitches can be divisive to a community and jailhouse informants are notoriously inaccurate. still, witness intimidation and "street justice" can be absolutely debilitating (in iraq as in baltimore). with regard to the video's popularity, it has clearly tapped into the strained relationships between young african american men and law enforcement, as well as the continuing popularity of thug iconography.

on the latter point, i was struck by a recent picture of mr. anthony posing in what appeared to be his home office. he had distanced himself from stop snitching, saying: "I'm completely against violence and drugs — that's not me... I've lost friends to violence. I would never support anybody harming anyone... I just want to help." fair enough for the nba role model, but his role models appear to be a little more comfortable with violence. anthony was seated before two enormous framed mugshot portraits of john gotti and al capone. the photo was a mirror image of former madison police chief david couper's office. couper, a minnesota sociology ph.d., had large posters of mahatma gandhi and martin luther king in his office. leave it to a madison cop to spruce up the office with the iconography of non-violence.
Posted by christopher uggen at 7:58 PM No comments: