steve sack and a pretty-much-free press 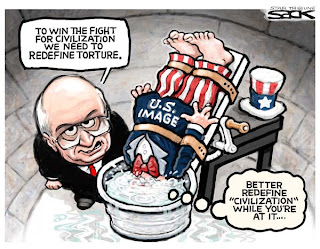 my favorite year in review stories are those showcasing the local paper's political cartoonist. maybe that's because the best cartoons always strike me as inherently sociological -- putting big concepts into play around a particular case. as today's story makes clear, my minneapolis strib is fortunate indeed to get regular images from steve sack.

op-eds are great, of course, but there's a magical whoa! moment when a fine cartoonist nails a complex set of ideas in a single image. the conceptual weight of such pictures can make the accompanying editorial seem ridiculously oversimplified by comparison. would a windy sociological essay on the meaning of civilization and its incompatibility with torture pack the same punch as the cartoon above?

i treasure my daily encounters with such powerful material over strong coffee and wheaties. too often, i suppose, we take these first amendment moments for granted. as cartoonists found themselves at the center of intense religious conflict this year, i was glad to see that few seemed to shrink from the controversy. if you agree, you might browse daryl cagle's rich archive of political cartoons, including many by mr. sack. did any cartoons move you this year?
Posted by christopher uggen at 5:11 PM No comments:

i just heard my october interview on npr's justice talking show about felon voting. for some chair/meeting-related reason, i had to run to the kfai studios that day, so i arrived winded and overcaffeinated in the midst of a pledge drive (hint: diet coke is a no-no before on-air interviews).

i liked the show and its host, margot adler, so i'm disappointed that the program isn't carried locally. they asked me for a quick "big-picture overview" on felon disenfranchisement, which is fine with me. my bit preceded a more intense debate between spencer overton and john lott on the subject. i really dislike debating, so i usually decline invitations to argue for or against policy changes. part of this is due to my self-concept as a social scientist, but part of it is because i'm a ridiculously conciliatory debater (yeah, i can sort of see your point there, mr. rumsfeld. are we almost done here?). i'm probably not alone -- many of us are probably more at home doing the "current state of knowledge" segment rather than the "what is to be done?" portion of such programs.
Posted by christopher uggen at 5:13 PM No comments:

courtney love has successfully completed rehab and probation and is now officially off-paper. judge rand rubin terminated ms. love's probation early when she finished a substance abuse treatment program. according to reuters, ms. love entered guilty pleas in 2004 and 2005 to some [silly] drug charges and pleaded no contest to [scary] assault charges in 2005:

Love was accused of dousing King with a bottle of Johnnie Walker Red Label scotch, throwing a lit candle at her head and pinching her breast. The attack came after Love found King sleeping on a couch at the home of Love's ex-boyfriend.

of course, this is no isolated incident. ms. love has had more than her share of legal problems over the years: juvenile and adult, criminal and civil, property and violent, trumped-up and let-off-easy. maybe i've got a soft spot for 42-year-olds named c-love, but i'm hoping this was her last pass through the criminal justice system.
Posted by christopher uggen at 5:36 PM No comments:

the pioneer press reports today that the city of st. paul will no longer require jobseekers to state on their applications whether they have ever been convicted of a crime. cities such as boston have already implemented this sort of pro-reintegration policy, but it remains a gutsy move by mayor chris coleman. background checks will continue to be conducted for positions involving direct contact with children, law enforcement, and positions of financial trust.
Posted by christopher uggen at 4:47 PM No comments:

i hope i never see embattled modifying my name

the times and post reported today on the allegations against embattled minneapolis fire chief bonnie bleskachek. mayor r.t. rybak has asked the city council to fire chief bleskachek after four lawsuits were filed against the city, accusing the chief of "playing sexual politics, retaliating against a former partner, acting as a lustful predator and showing bias against at least one heterosexual male firefighter."

yeesh. as in many sexual harassment cases, the allegations are pretty bad. it looked as though the city would settle up and cut a deal with the chief, but the taxpayers protested with a collective "oh, come on!" when ms. bleskachek was offered a severance package of about $41,000 and another job in the department.

i can't determine whether this is a case of a serial harasser and authority-abuser, or a case of homophobic piling-on against the nation's first openly lesbian urban fire chief, or, i suppose, some combination of the two. having spent a little time studying sexual harassment, i can say that the allegations made in this case are not atypical. as a department chair in an authority position, however, i'm sympathetic to ms. bleskachek's position: “I wanted to have my day in court, to be deposed, to force these people to produce some proof,” she said. “It’s a devastating blow to my career, my reputation, my everything.”
Posted by christopher uggen at 5:03 PM No comments:

my nyc punishment conference ended strangely friday night. after the final session, i joined a couple friends at a nearby hotel bar. i felt pretty intoxicated after a drink and a half and went back to my room. i attributed my wooziness to a long day of sessions and an empty stomach, but the next day one of my companions emailed to suggest that something may have been slipped into her drink:

I actually ended up going to the police and reporting this incident. I am now about 100% sure that roofies were slipped into that second drink. My reaction was very unusual. I usually have quite high tolerance to alcohol, yet after a few sips of the 2nd drink, I almost instantly felt out of it. I passed out as soon as I got home and was out cold for about 7 hours. Yet, I woke up around 5AM perfectly fine and not feeling hungover at all.

i won't name the people or places, at least until i learn more about what happened. but i've got more questions than google can answer.

* why would someone target a woman sitting with two other men? rohypnol-like substances can be used for drug-facilitated robbery as well as for drug-facilitated sexual assault. the three of us were well-dressed for the conference (by academic standards, that is), but weren't flashing cash around.

* who could have done it? the other male in our party is an old friend and above suspicion (i hope that i am as well!). i don't think the drinks ever left our sight, but i wouldn't blame the bartenders without much more evidence. do bartenders often feel they've been falsely accused in such situations?

* my friend woke up with two black eyes. are any of the roofie-like drugs linked to this sort of discoloration?

* how common are such experiences? i couldn't find any good stats beyond monitoring the future high school students, which suggest a low rate ( < 2%) of self-reported use.
Posted by christopher uggen at 5:04 PM 1 comment: