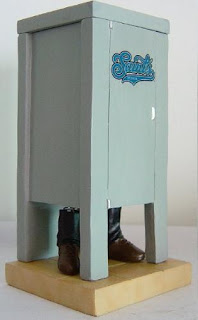 the saint paul saints, our beloved local nine, will be giving away 2,500 of these fine collector's edition bobblefoot keepsakes at sunday's game at midway stadium.

the saints straight-facedly claim that the bathroom stall promotion was intended to coincide with national tap dance day, since one of the dangling feet is springloaded such that it "taps" or bobbles.

i'm not one to judge folks based on their worst moments (lest i be judged, i suppose), but this promotion seems innocuous to me. the saints don't even mention the distinguished senator from idaho, though the bobblefoot might be construed as an homage to his foot-tapping and wide stance.

last year, the saints took some heat for giving away a michael vick dog chew toy. have they finally crossed the line with this promotion? a pioneer press poll put the question to readers. of 119 votes, 7 percent said "yes, it's nothing to laugh at," 30 percent said "no, it doesn't offend me," and 63 percent said "come on, it's the saints! they gave away a randy moss hood ornament for cryin' out loud! [note: mr. moss had recently run over a traffic officer].

let's see, the game starts at 7:05 sunday. what do you think it would cost to purchase one of these fine bobblefoots on ebay this monday? i'm guessing that some tap dance afficionado would go as high as fifty bucks.
Posted by christopher uggen at 10:37 PM