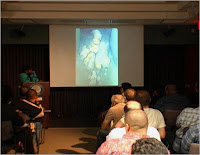 criminologists typically adopt a supply-side approach, rather than viewing crime as a problem of demand for illegal goods and services. demand reduction strategies have long been practiced with regard to substance use. if effective, however, the idea might be productively extended to problem landlords and myriad other areas. for prostitution, at least, there's some evidence that simple interventions with consumers might slow demand.

nij and the san francisco chronicle report that the first offender prostitution program (or "john school") might be effective in reducing the demand for prostitution. i say "might" because the clever multi-method analysis (details here) by abt associates isn't really set up to make strong causal claims.

In the FOPP, eligible arrestees are given the choice of paying a fee and attending a one-day class (known generically as the "john school"), or being prosecuted. During its more than 12 years of operation, 5,735 men have attended the FOPP's john school. The fees support all of the costs of conducting the john school classes, as well as subsidizing police vice operations, the screening and processing of arrestees, and recovery programs for women and girls involved in commercial sex...

there are some ecological leaps in such an analysis, of course, and reliance on an arrest indicator seems problematic to me (e.g., enforcement priorities are locally determined; what if the class just teaches johns to avoid detection?). nevertheless, i like the study and the idea seems promising enough to merit continued systematic evaluation and a search for the mechanisms linking the program to recidivism. might john school work through shaming, deterrence, education, or some other mechanism?
Posted by christopher uggen at 6:45 PM