no touching at armatage elementary 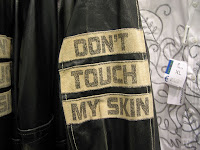 these are desperate times for school administrators. the strib reports that armatage elementary in minneapolis now maintains an official "no touch" policy:

Originally the rule, circulated to parents Thursday, banned even casual touching such as hand-holding and hugging. But Principal Joan Franks has now refined the policy to target aggressive and "unsafe" behavior such as play-fighting, pushing and shoving. And tag.

yeesh. wouldn't banning hitting be sufficient? as an administrator, i certainly understand the motivations here. as a parent, however, i see how kids need much touch just to get through a long, alienating day in the classroom. for esperanza and her middle-school friends, this takes the form of hugging in the hallways and packing in close together in the lunchroom. for tor and his buddies, this sometimes takes the form of behaviors specifically outlawed: play-fighting, pushing, and shoving (not to mention football, rugby, and wrestling).

i can't make a strong causal argument that touch improves mental health -- perhaps there is a literature addressing this question -- but i can see a clear correlation. when my kids do more touching they seem more socially connected and happier. when my large lad puts me in a headlock or punches my shoulder, we're usually both laughing and i'm feeling pretty good about our relationship.

but those are just my views as a parent. as a sociologist who studies rules and their enforcement, i've got another observation. creating such a no-touch rule will likely create a new class of rule violators and a new cause of action for school discipline. given the gender distribution of behaviors such as play-fighting, pushing, and shoving, i would predict that boys will be disproportionately subject to such discipline. given the race and class distribution of those disciplined for other school misconduct, i would predict that children of color and those from working class families will be disproportionately subject to such discipline. when the minneapolis schools do the next round of hand-wringing about race and gender gaps in school achievement, they might consider the impact of disciplinary practices such as the no-touch rule.
Posted by christopher uggen at 1:54 PM