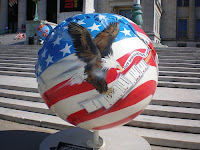 conor clarke and greg yothers offer a nice boston globe op-ed on felon voting -- the more we imprison, the less we vote. here's the bit i like:

[O]ur experience in class suggests that the opposite is true. We all write the same papers, read the same material by John Locke and Alexis de Tocqueville, and are all equally engaged in debating and discussing everything from the role of the good citizen to America's role in the world. There is no reason to think inmates are uniquely unqualified to wield a vote, and no reason to think they can't.

Yes, going to prison necessarily entails the loss of liberty. But the right to vote is in many ways more important than the right to walk freely down the street: Voting is the most basic check against the coercive power of the state. The places where that coercive power is most starkly exercised, such as prisons, are also the places where that most basic of checks becomes more important. The fact that prisoners have a big stake in governmental choices isn't an argument in favor of disenfranchisement; it's an argument against.
Posted by christopher uggen at 1:53 PM